When Michael Huneycutt first heard about the Bryan School’s stackable graduate certificates, he says they sounded like stepping stones. 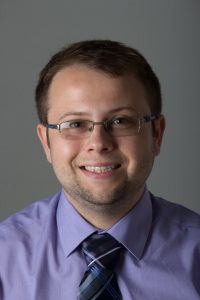 “I did some requests on it and started reading and they aligned very closely to the degree program,” he said. “The certificates count toward degrees, so I thought I’ll go this route for sure. I saw it as an opportunity to do this on the safe side.”

Huneycutt, who is studying IT Management, has been navigating his own unique route through higher education for years. He views these certificates as a series of sprints in his long journey toward earning a master’s degree.

That journey started in Lexington, North Carolina, where he grew up.

“My family was in factories, so I grew up around factories. When they would leave, my parents would struggle for jobs and things like that,” he said. “I grew up in a not-so-wealthy family, the childhood aspects of that, and I ended up hanging around the wrong crowd of people in high school.”

Huneycutt dropped out at 16, a decision he now describes as terrible.

“At 18 it was time to join the workforce,” he said. “I started working at this place up in Thomasville, a racing shop, kind of like a warehouse and basically I decided to get my GED while working there, working around some positive people and my surroundings began to change, working with people who had direction.”

Huneycutt is thankful for some of the positive influences he met during this period of his life, particularly the person who helped him earn his GED. Before long, he’d enrolled in a community college.

“I ended up telling a factory manager at a different job that I’m not going to come back, I’m going to pursue college full time,” he said. “I wanted to be more selective with what I was doing so I went and started working at a Lexington fulfillment center and I ended up in a leadership position for a few years. I started having mentors around me trying to bring me up and train me. So I got a really good value of leadership and persistence and wanted to strive to be the best.” 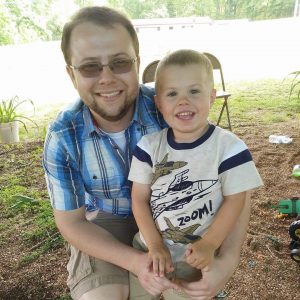 Huneycutt’s next step brought him and his child’s mother up to the Boone area, where he had a realization.

“You know, I always knew I was into computers as a kid. I messed up my mother’s computer at times,” he joked. “I liked to take things apart and see how things work.”

After another round of community college classes and a job at a car dealership, Huneycutt applied at Appalachian State and declared as a computer science major.

“I started doing that and got an opportunity to work in IT on campus. After a couple of semesters, I started working down there and it was fantastic because downstairs was IT support, and upstairs that’s where my major was,” he said. “I’d just go back and forth.”

But Huneycutt wasn’t done. He wanted to earn his master’s, so he started researching. That’s when he began to read about the Bryan School’s stackable graduate certificates.

“It kind of waives the GMAT requirement,” he said. “Which I was kind of iffy on going back into, so, if I just work hard at the certificate program I can waive the GMAT and go right into the master’s program.”

Now a Business Intelligence Analyst for Catawba College, Huneycutt is back in Lexington. His plate is full, a single father working full time and pursuing a master’s. But he’s still looking forward, hoping to get into some type of leadership position in IT. In a perfect world, he’d want to start a nonprofit that helps students like him get back on track in their education, paying forward some of the encouraging mentors he met on his path to the Bryan School.

“I’m hoping this will open up more doors,” he said. “And I don’t have any doubts that it will.”