Before attending UNC Greensboro, Dev Bhandari was a Bhutanese refugee living in High Point. When he found out members of that Bhutanese community recently tested positive for COVID-19, he knew he wanted to help.

“I said, ‘Let me reach out to my network, or send emails to Greensboro, city of High Point, or nonprofits who may be willing to help.’ That is how it initially started because I didn’t have supplies and essentials to contribute to them,” said Bhandari (BS Business Administration ’16).

Many of the individuals impacted work at the same chicken processing plant in Wilkesboro, and the exposure may have originated there, Bhandari said. Before long, he began hearing more people had become sick. He says his relief efforts started small, personally dropping off whatever he could — a bottle of sanitizer here or a few masks there, which had been donated by the Center for New North Carolinians and various temples in Winston Salem.

Bhandari says for some, a language barrier may have contributed to a lack of awareness regarding the pandemic.

“Their families, neighborhood — it’s a culture where they visit neighbors,” he said. “Someone needed to step in and stand with them and connect them to the resources.”

Bhandari was able to act as a go-between for those impacted by the virus and a representative from their employer, discussing things like medical leave and compensation. He said once that connection was made, the company was very supportive.

“Because of the language barriers, they didn’t know when to return to work,” said Bhandari.

Another goal of his was to get in touch with medical professionals who speak Nepali, and eventually, he was able to get doctors to meet with members of the community through Zoom video calls.

Soon thereafter, Bhandari began to hear from national nonprofits and organizations such as the Global Bhutanese Hindu Organization asking what was needed. City officials in the Triad who he’d messaged blindly at first began reaching out. He began receiving sanitizer from the Fainting Goat in Greensboro along with masks and gloves. He said he also obtained a $1,500 grant from Greensboro Mutual Aid to assist the families.

“I was not expecting all those responses but I was kind of, like, surprised they were willing to step in,” said Bhandari. “Normally when you email you wouldn’t get that response. It’s good everyone’s willing to help.” 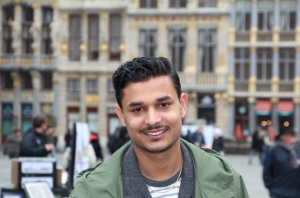 Bhandari works as chair for the International Advisory Committee with the city of High Point, serves as a commissioner for the Human Relations Commission, serves as treasurer for the International Institute of Peace and Harmony, and works at Wells Fargo as a business banking specialist. On the side, he supports students from UNCG and other universities with their research and connects them with Bhutanese communities, and is planning to return to the Bryan School this summer to earn his Master’s in Accounting.

Still, he manages to make many of the supply drops himself, and says he will continue seeking all kinds of support for the 25 families he’s coordinating with, who account for nearly 50 cases between High Point, Winston Salem, and Wilkesboro.

“Good wishes, prayer — it is a serious matter. It is important to support them on time. That is why I would like to request everybody to proactively come out if they are willing to help. Reach out to me, help them out,” he said. “The biggest thing I could say, it does not matter which community you belong to. I think a lot of young people, they get to come out, they can proactively do something much more understanding to help the community and invest time and make a difference.”