It was a small piece of advice, but Robin Moulton found it to be profound.

“You don’t always have to know exactly what you’re doing to start,” he said. 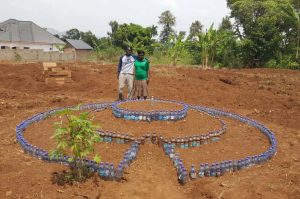 The sentiment was delivered to him by a supervisor while in the Peace Corps. Moulton was working with Eco-Agric in Uganda at the time, an organization that aims to improve lives through agricultural transformation, disease prevention, and maintaining a healthy environment.

Moulton (BS Marketing ‘16) is now back home in North Carolina, his time in the Peace Corps cut short by the Coronavirus pandemic. He hopes the lessons he learned abroad will help him as he moves forward in his journey, one that began at UNC Greensboro’s Bryan School of Business and Economics.

During his time at UNCG, Moulton stayed involved with extracurriculars, trying to tie in a green or eco-friendly aspect to each project as best he could. One of them was a waterless car wash and mobile detailing service.

“I feel like I molded myself through the Bryan School. Just being there, realizing more than anything that the world is at your fingertips,” said Moulton.

After graduation, Moulton secured a full-time job in Chapel Hill. But that notion of having the world at his fingertips was stuck in the back of his head, and he couldn’t shake the idea of doing something bigger.

“Honestly, I had been trying to get to the continent of Africa since I got into college,” he said.

Moulton decided to join the Peace Corps, drawn ultimately by a desire to learn about other cultures. He began in western Uganda, giving HIV lessons to a local village school and working at a small farm.

“There is this tree called moringa that’s kind of like a superfood,” said Moulton. “The leaves, when you crush them, are like a nutritional supplement. I found someone in the capital who was looking to purchase that, and there was like an acre and a half on the farm. So I gathered my neighbors and tried to get them an income-generating activity to use this as a way to make money.”

After a land dispute at the original location, Moulton was eventually paired with Eco-Agric in Uganda’s Hoima District. 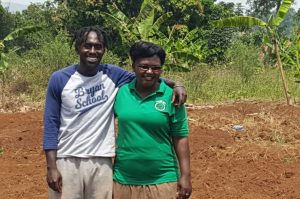 “Their mission was essentially to try and do the same thing as (my first Peace Corps assignment), which is to empower local farmers,” Moulton said.

That’s where he met his new supervisor, who he says grew up in a house made of mud. The supervisor often tried to show people what they could do with the little they had, even constructing wood-burning stoves out of mud.

Those lessons in innovation and proactivity stuck with Moulton as he worked the gardens and helped teach villagers how to make something out of nothing. You don’t always have to know exactly what you’re doing to start.

Moulton is trying to apply this advice to his own life now that his time in the Peace Corps has come to an end. He thinks current Bryan School students may find these messages useful.

“There won’t be a time where you feel like you’ve figured it out, so don’t feel the pressure to,” said Moulton. “College is a great place to start, but you don’t have to be finished by the time you graduate. You’ll always be figuring things out. Don’t feel what you’re doing now has to be the end. Continue striving. Whatever it is that you want, put in the work.”