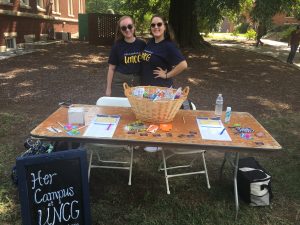 During her freshman year, Hannah Trudeau ’18 searched for a group on campus where she felt she fit best. After a year of coming up empty, she decided to do something about it and start her own organization. Rather than creating one from nothing, she looked into a site called Her Campus. Her Campus is a women-run online magazine that give collegiate writers a place to post about college and life-related topics. She decided to approach an old friend Madison Hemric ’18, who is pursuing a minor in women’s and gender studies, for help starting the new group.

Today, Hemric is president and Trudeau is editor-in-chief of Her Campus at UNCG. They make up two of five members of the executive board, a group of students who lead ten other writers. Heading a group of thirteen unpaid writers – even with the help of others – is uncharted territory for both Hemric and Trudeau. The new experiences led them to learn and cultivate new business skills.

For Hemric, some of the skills she learned were things like flexibility, clarity of expectations, and promotional social media usage. She said that this position has helped her learn to be more flexible and not stress over every little thing. This branches out to when she has to convey her expectations for the writers clearly; she has to always remember that not everyone will interpret them as she intended.

She also has learned to use social media as a promotional and marketing tool. Before Her Campus, she had only been on certain networks for personal use. “The only reason I have the Twitter app on my phone is for UNCG’s Her Campus Twitter account,” she said.

The skills Trudeau feels she’s learned are things such as better leadership and time management skills, working with a diverse group of people, and patience. The first two skills she listed tie into the career field she wants to go into after she graduates – international business, specifically management.

One skill they both feel they’ve cultivated is communication, specifically with people in positions of authority. “We’ve been given a platform to practice our business communication skills,” Trudeau said. They have to communicate with the national Her Campus team, their Her Campus advisor, their faculty advisor at UNCG, and their team. Each of these require different ways to communicate effectively.

Hemric, Trudeau, and the other three members of the leadership team will all graduate in May. In order to keep Her Campus going on UNCG’s campus, Hemric and Trudeau implemented a mentorship program, pairing writers who expressed interest in possibly taking on a leadership role with a member of the executive board. However, instead of pairing them based on interest in position, the two created matches based on writing style.