“Everybody’s talking about it. Everybody’s doing it. Operation Match! It’s the modern way to meet. It whammo’s blind dates. Just answer the questions about yourself, what you are like, what you like, and send the questionnaire in with $3.00. You’ll receive 5 ideal dates for you right from your campus area,” read the 1966 ad for Operation Match, a program run on IBM’s 7090 Computer, “the world’s most perfect boy/girl matcher”.

“Now a gal can really choose the kind of guy she wants, not just wait and hope he comes along!”

That’s the experience that Liz Simmons had as a result of participating in Operation Match when she was a biology student at UNC Greensboro. She was hesitant to fill out the survey, but her roommate convinced her to give it a try. Bill, who happily participated, had just graduated from North Carolina State University and was heading out for his Marine Reserve boot camp.

After Bill checked out Liz’s looks in a school annual at the library, he called her.  He spoke with Liz’s roommate who him that Liz was in the lab.  Soon they spoke and set up a date.

Liz’s room was on the front side of Grogan Residence Hall. Its big windows made it easy to observe everyone coming in the front door. Bill arrived at 3 pm for an early date and passed the “window” test. A city-wide curfew was in place in response to the Greensboro Uprising, meaning civilians could be out only between 8 am and 5 pm. They enjoyed their first date.

Not long after, Liz went to graduate school at Duke. Bill finished his reserve service and took a job at a High Point furniture company. They visited each other on weekends until Liz graduated. In 1972 they became engaged, and soon they were married – and have been so ever since.

Liz ran the lab in the Guilford County Family Planning Clinic. Bill began his MBA at what was the newly established School of Business and Economics – now known as the Bryan School. He continued working full time and took evening classes for the next six years to complete his degree. 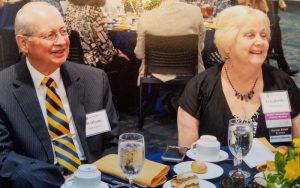 Ninety percent of the MBA students worked during the day and went to night school. Bill recalls the great benefits of working on case studies throughout his MBA, something that the Bryan School still emphasizes. “We would research a position thoroughly, break into groups, and solve really tough problems. I carried these beneficial experiences into my professional life.”

Some of the classes required computer programming, which in those days meant punching holes in hundreds of cards. Because Bill’s time was so limited Liz often took a stack of his cards to the computer lab to run his program. Bill’s professors saw her there so often that they jokingly offered to give her Bill’s grades.

Liz and Bill welcomed their daughter in 1977. Soon, Bill graduated with his MBA and his company gave him a promotion took him to Morganton, NC. His undergraduate degree in engineering and manufacturing, coupled with his MBA, gave him opportunities for a long and rewarding career in management.

The two are happily retired now and enjoy volunteering at local schools to help children learn to read.

Liz laughs to think about her college roommate’s role in her life – she pushed her to fill out the survey, she was the first one to speak with Bill. “She was disappointed that she wasn’t as lucky as I was with the outcome of her survey!” 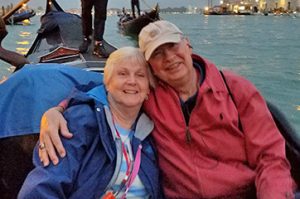