Take chances, learn from your mistakes, and never forget the people who helped you along the way. Those are the driving principles that accomplished serial entrepreneur Kirk Galiani ʼ87 (Finance) learned from his grandfathers — one an Italian immigrant who came to this country during the Great Depression and worked his way up to become a well-respected optician, and the other who came from limited means and used his intelligence and drive to earn scholarships that funded his education toward becoming a doctor. 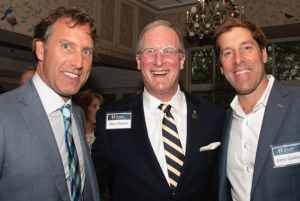 The lessons from his grandfathers; the positive influence of his parents, family, and wife of 30 years, Maria; as well as the confidence inspired by his time at the Bryan School of Business and Economics were foundational in Galiani’s business success. That success was honored with the Bryan School’s 2019 Distinguished Alumni Award recognizing his significant achievement in the fitness industry and his contribution to the business community. Galiani, alongside his brother, John, is the founder and co-executive chairman of US Fitness Holdings, LLC, which operates the Sport & Health and Onelife Fitness brands.

Since going into business together in 1990, their mission has been to deliver “the ultimate fitness experience to every member, every time.”

“That experience might be different for almost everyone who walks through the door,” Galiani says. “Some people want to go to a gym filled with friendly faces. For others, what’s most important is a very clean club, the most modern equipment, a wide variety of classes and amenities, or a great kids club.”

Galiani recently gave the Bryan School a gift to support its Blueprint Series curriculum and Bryan Gold career readiness challenge, both of which are intended to bolster the personal and professional development of undergraduate students.

“I was not a great scholar, but I feel it’s important for all students to know that grades aren’t the only factor in success,” he says. “You can be smart and talented but struggle in school and still achieve your dreams.”

Working with Dean McRae Banks on an advisory board, Galiani says he saw firsthand how Dr. Banks and his team work tirelessly to improve the business school and to help its students. Under Banks’ leadership, the Bryan School continues to reach new heights each and every year.

“My time at the Bryan School helped me feel confident to compete in all aspects of business,” Galiani says.

BUILDING A HEALTH AND FITNESS EMPIRE

Kirk and John played just about every sport from the time they were young, including Kirk’s stint on the UNCG rugby team, which won two state titles during his career. His passion to compete has never wavered and served him well in business.

In the midst of the 1980s recession, the commercial real estate company Galiani worked for was going bankrupt, so he and his brother decided to pursue a different path. With a small loan cosigned by their father, they opened a little Gold’s Gym franchise in a historic schoolhouse. Nine years later, the Galiani brothers had grown the franchise to 10 locations and had become the most profitable Gold’s Gym franchisees in the world. In 1999, they partnered with private equity group Brockway Moran to purchase Gold’s Gym International, and they helped the franchise grow to more than 700 clubs across almost every state and 23 countries. They professionalized the brand, creating Gold’s Gym University, and they overhauled the product licensing division to become a larger part of the business, focusing on apparel, soft goods, athletic accessories, and equipment. After selling Gold’s Gym International in 2004 in the first major private equity exit in the industry, the Galianis prepared for their next chapter, launching a new company with an attractive and pioneering business model.

“This time we focused on where we felt the health club industry was going: high-amenity, high-value, large multipurpose health clubs that offered everything from boutique-style studios for yoga, barre, spin, and all kinds of group exercise classes, to a large kids club, functional turf training, basketball courts, swimming pools, and the most modern and best fitness equipment available,” Galiani says. “That’s how Onelife Fitness was born.”

In 2011, they launched US Fitness in partnership with New Evolution Ventures and Vision Capital. Through greenfield development and acquisitions, the Galianis have grown their company to employ more than 5,000 people across more than 55 locations in five states and the District of Columbia. In 2018, the Galiani brothers partnered with Delos Capital, a private equity firm out of New York, and HRS Management, the family office of Philadelphia area sports magnate and Apollo Global Management founder Joshua Harris. In addition to being fitness industry pioneers, the Galiani brothers have a substantial amount of real estate developments, including single-family homes, shopping centers, and office buildings.

“I feel that I am one of the luckiest people, to have the support of family and friends and the opportunities I’ve had, plus the ability to always surround myself with talented and character-driven people over the years,” Galiani says. “Though we never considered working together in our younger years, I don’t believe I could’ve accomplished what I’ve accomplished without my brother John, who I view as the best partner and my best friend.”