Earlier this year, junior Owen Perrien landed a two-year internship with Edmonds, Hunt & Associates financial services in Greensboro. Not long before that, however, he was at home in Durham thinking about what a fresh start in higher education might look like.

“After I transferred I had taken a year off, and during that year at home it was kind of, you know, we didn’t have to say it,” he said.

Perrien is the first to admit that his first semesters of college didn’t go as planned. But when he decided to transfer to UNC Greensboro, he meant business.

“I wanted to go somewhere that had a good program for business,” he said. “That’s one of the things that reassured me about coming here. I wasn’t exactly sure if UNCG was going to be good for me, but I was very reassured when I heard how competitive the Bryan School was. So that was a big, big difference.”

Perrien says something caught his ear during orientation. 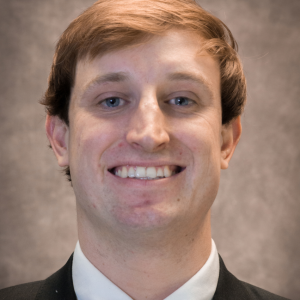 “I knew, you know, this is it this time. I’m going to be serious. I was going to get involved,” he said. “I think it was during my orientation I heard about the Company Spotlights. I’m pretty sure it was something simple, like one of the things UNCG does is bring companies in to make a presentation about what they do, and I thought that sounded interesting. They mentioned that sometimes people get internships and get hired and that it was a good way to network.”

“I was also interested to hear about how companies run in general, so that’s what I was initially there for. They mentioned their internship program. I was impressed. It didn’t seem like, ‘Oh you’re going to be an intern and do the intern work,’ they actually had a program established that had been around for a while,” he said. “It seemed like they really trained their interns.”

After chatting with one of the representatives from Edmonds, Hunt & Associates, he said they asked him to follow up. He did and landed an interview.

“It worked out pretty well. It felt great, man, I’m not going to lie,” he said. “I was not expecting that. As I said, I was just going to learn about the company.”

Even though he’d landed an internship at the first Company Spotlight he attended, Perrien continued to go, even convincing his roommates, who are also business students, to attend. He didn’t miss a single one before in-person events were impacted by the coronavirus at the tail end of the spring semester.

“Every spotlight I’ve been to has been interesting for different reasons, just, at the very least learning about different companies and how they operate in the real world,” he said. “Every single company at the end is like, ‘We’re looking to hire. We’re looking for interns.’ And that’s literally an opportunity to get a face-to-face meeting to separate you from the resumes they’re getting.”

When he’s not studying or working on his internship, Perrien helps with his parents’ company, which designs iPhone apps and web pages. He also brought a College Truckers franchise to UNCG, a moving company that focuses on campus move-out season.

As far as advice to fellow Bryan School students, Perrien looks at Company Spotlights as an opportunity to put on something nice and network face-to-face.

“If you’re a business student, why wouldn’t you go get free insight into how companies work and potentially get a job or internship out of it?” he said.