A long-standing relationship between UNC Greensboro and Pepsi, coupled with Pepsi’s commitment to sales education, has resulted in a major gift for the North Carolina Sales Institute (NCSI). As part of Pepsi’s pouring rights contract with the University, the organization designated a gift of $50,000 to the Sales Institute.

The Start of a Sweet Partnership 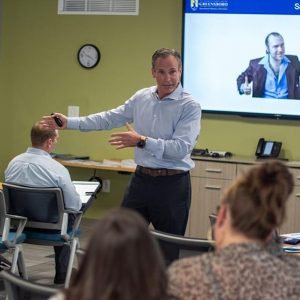 The relationship between the NCSI, located within the Bryan School, and Pepsi Bottling Ventures goes back to the beginning of the program in 2015 when Pepsi signed on as one of the organization’s original partners.

According to NCSI co-founder John Chapman, former Pepsi Director of Sales Randy Laster was the driving force behind the partnership. “Randy is the man that made it happen,” Chapman said. “He really believes in the Institute. He introduced us to Rebecca (key account manager for Pepsi’s education division) before he retired, and she believes in us like Randy does. They love the work we’re doing here.”

As part of their partnership, Pepsi hosts a yearly lecture during Chapman’s MKT/ENT 305 class. This year, Lotz spoke to students on what Pepsi looks for in a new hire.

Lotz’s visit continues a history of mentorship established by Laster. “Randy made a point to get involved in helping (our students),” Chapman said, recalling that Laster took time after one of his classes to personally coach a student. “Randy stayed one evening to help a girl with her interview skills. He’s just that kind of guy. He wants to see our students do well.”

The relationship between Pepsi and the North Carolina Sales Institute holds just as much value to Rebecca Lotz as the decades-long relationship between the soft drink retailer and UNCG. “The work John is doing with you all is amazing, and it’s very important,” she told Chapman’s class during her lecture. “This program was one of the things that really made me want to be involved with this campus.”

The Impact of a Strong Advocate

“When Randy was negotiating the new contract (between Pepsi and UNCG), he made this gift that we’re getting a key point in the deal.” Chapman recalled, “Randy told me, ‘John, I want to make sure that the Sales Institute is taken care of for a long time.’ He wanted to look out for us, so he made that money part of the negotiation and had it put in the contract. They believe in the mission. They believe in us.”

In the wake of Laster’s retirement, Rebecca Lotz has become a major voice for the Sales Institute at Pepsi Bottling Ventures. “Students here learn things that other programs would skim over or skip altogether,” Lotz said. “They’re given the tools to build a foundation and develop skills that few sales professionals are even aware that they need for success on day one. There’s nothing else like it.”

Few skills, according to Lotz, are more important than the ability to build a lasting and impactful relationship. “The relationship between Pepsi and UNCG started with a handshake agreement years ago. Today, it’s a formal ten-year contract, but the principle is still the same,” Lotz said. “You’ve got to invest time to gain a client’s trust and confidence. That shows them that their needs matter to you, and that you’re looking out for their best interests. That’s how good relationships are built. If we couldn’t build on the trust forged by that handshake, I probably wouldn’t be here today.”

Lotz added, “This program is so important to future sales professionals because it really emphasizes the importance of relationship building. (John) leads by example. He gets to know his students and invests in their success. They’re learning an important lesson without actually realizing it, that it’s important to truly connect with your clients.”

This year, over 300 students are taking part in the North Carolina Sales Institute program. Chapman says that the money from Pepsi will be used to fund activities that help students develop crucial skills.