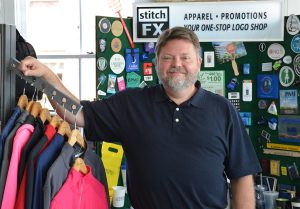 “Greensboro,” Clayton said, “unlike some of the larger cities in our state, doesn’t always show up on other people’s radar. There’s always something going on – but you may have to look for it.”

Clayton graduated from the Bryan School with a BS in management and marketing and a BS in Spanish. From childhood he knew that he wanted to start his own business. In 1993, he launched a custom embroidery business named Stitch-FX from his kitchen table. The venture combined his interests in art and business. Over time, the business grew to include a wide range of promotional products.

According to Clayton, one of the biggest challenges of his business is staying relevant. “Times change and you have to learn to read the room to stay viable, to stay fresh, and stay alive. It’s all about finding the correct place for your business – the number of employees, where to market – and about a decent amount of common sense and knowledge.”

One of the most important lessons Clayton said he learned at UNCG was to think things through thoroughly. “If a situation presents itself,” he said, “good or bad, don’t just react; think it through. ‘If this, then that.’”

With Stitch-FX coming on its 25th anniversary, Clayton has clearly found a winning mix of these elements. Not content to own just one business, Clayton has spent the past decade refining the idea for his new business. He and two partners opened a new shop called Hudson’s Hill in 2011. Clayton’s love of Greensboro is strongly reflected in the business, which sells denim and other apparel, apothecary items, and handmade objects.

“I’ve always appreciated Durham, where I’m from, but Greensboro offered me more for my industry. What I needed for my job – the embroidery industry – was right here in my back yard, so to speak.”

Clayton recently moved the showroom for Stitch-FX to a new location in downtown Greensboro, just down the street from Hudson’s Hill. The building that is now his office was one that reminded him of an old building in Durham he loved but had been torn down to build a hotel. His current office had caught his eye years before; so, when it went on the market in 2014, he was quick to buy it.

“My 122-year-old office with five-foot-tall windows and natural light all around is the best place I can imagine to work and I know, as far as I’m concerned, that she will never give way to a hotel or any other structure.  She is perfect just like she is.”

Clayton, along with other like-minded individuals, believe in the future of downtown Greensboro and what they know it can become. “From my vantage point, there are a lot of souls like me who love these old buildings and I believe the trend of uplifting these beautiful structures will continue.”