In January, Mance joined 29 other college students on a four-day trip to L.A. They met with top executives at these global brands, providing insight on their generation and gaining valuable experience and contacts.

“When we would go to these companies, they would have a lot of questions for us,” said Mance, an undergraduate pursuing a B.S. in Business Administration. “We were a resource for them with trying to get different perspectives, (and)… they were a resource by giving us this opportunity to be able to network with them, talk with them, and pick their brains.”

Many of these companies had similar questions, according to Mance, like “What do millennials want in a workplace?” and “What makes your generation different from your parents?” With millennials making up nearly a quarter of the United States’ population, everyone wants to know how this generation thinks.

“Millennials are looking for growth,” Mance said. However, it may not be growth in the typical sense. Mance acknowledged that most millennials don’t want to stay in the same company for 35+ years, shuffling from position to position. They want to grow through continued interaction with new perspectives, challenges, and experiences. 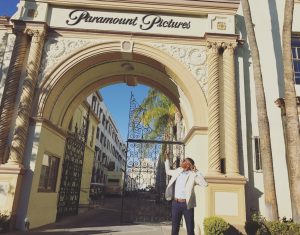 udents enjoyed breakfast with executives, tours of studios and companies, panel discussions, and professional dinners. During down time, they toured Sony Studios, Paramount, YouTube, and met some interesting people.

“For Sony Studios, they showed us around, we spoke with the talent acquisitions team, and we had a mixer with big executives there,” Mance said. “I remember having a conversation with this one guy, who was telling me he used to be a movie producer…and worked with Will Smith on the Fresh Prince.”

“When we walked into the studio, in Sony, I was the first person to open the door to the offices and I looked to the right and there was Spike Lee,” Mance said. “He was going to a meeting, but was really cool and talked to me.”

The National Millennial Community (NMC) was founded in 2015 by Bill Imada, Chairman and Chief Connectivity Officer of IW Group. He felt a need to change the conversation about the millennial generation, so he sought out high-quality students from lesser-known universities who he felt deserved a voice. The Bryan School was invited to represent the state of North Carolina.

Mance is one of four students representing the Bryan School on the NMC this year.

The trip to Los Angeles was part of a “Community Summit” event series. NMC Student members, like Mance, speak with influential individuals from leading organizations all over the United States to engage in a conversation between millennials and executives. With eight Community Summit events offered each year, the conversations are designed to provide access and understanding to the diversity that guides millennial thinking, according to the National Millennial Community website.