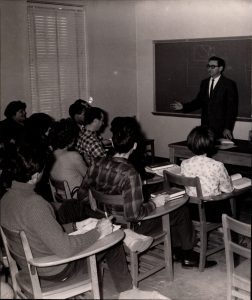 UNC Greensboro established the School of Business and Economics in 1969, in an era that saw the creation of many business schools. At that time, regional public universities felt they needed business schools to be considered “real”universities by external stakeholders. They also recognized a clear need to develop Master of Business Administration programs.

“The founding dean, Dr. David Shelton, laid the cornerstone, and the people who followed built on that foundation,: says Jim Weeks, Dean Emeritus of the Bryan School. “Our success is due to the work of a lot of people over a long period of time.”

Large employers across the country clamored for business schools and MBA programs to attract, develop, and retain
employees in their areas.

“The Piedmont Triad region had some of the largest textile, furniture, and tobacco companies in the world,” says Weeks. “In addition, AT&T, Westinghouse, Wachovia, and many other large operations gave the region an economic profile that attracted lots of people. From our founding, it was in our DNA to set a high bar for excellence in all our programs.”

Case in point? The school’s Master of Science in Business Administration program (now the MBA program) was the first part-time program serving working professionals in the region.

Weeks joined the school as an assistant professor in 1976 and became associate dean for academic programs in 1982 and dean in 1990. His experience as assistant director of the MBA program at the University of South Carolina while completing his doctoral degree helped him contribute to the development of the Bryan School’s early years. 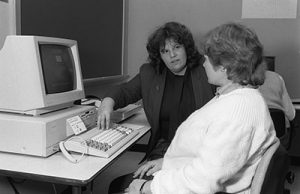 t was “all hands on deck” when it came to developing new academic programs, recruiting faculty and students, and designing courses, says Weeks.

In 1990, Weeks became acting dean, and then he served as dean from 1991 through 2011. He had two major goals for the Bryan School – increased fundraising and an increased focus on internationalization. He met with the school’s namesake, Joseph M. Bryan, a significant financial donor and local humanitarian. Both understood the value of fundraising for scholarships, student development, faculty professorships, and “having the resources to do what our internal and external stakeholders wanted us to do.” Before building a strong fundraising
network – which ultimately increased the school’s endowment sixfold during his tenure – Weeks led a lot of “friend-raising activities,” establishing relationships with community and industry partners and alumni.

On the internationalization front, “globalization was sweeping the business world and was highly disruptive to our local businesses,” says Weeks. The school’s business advisory board, administrators, and faculty decided graduates should be well-versed in international business and economics.

“We led the effort to make UNCG the leading UNC campus for student exchange programs,” says Weeks. “The school’s exchange program is one of the things of which I am most proud. Our business community drove us to do it, and we had the capability to build that program because Mr. Bryan left us a wonderful endowment and building exchange programs
was a major university priority.”

Bryan School majors accounted for more UNCG students studying abroad than any other academic unit on campus, and the school was also the unit receiving the most foreign exchange students on campus. Internationalization efforts grew university-wide with faculty exchanges, joint programs, and the establishment of the UNCG International Programs
Center.

Weeks is proud of the school’s continued progress in staying up to date with industry and student needs, such as adding the entrepreneurship program, expanding graduate programs, and implementing a professional development curriculum. He says current Dean McRae “Mac” Banks has “done a terrific job building key undergraduate and graduate
experiences that align with students’ ability to find meaningful careers and enjoy their lives.”

FOCUSING ON THE FUTURE 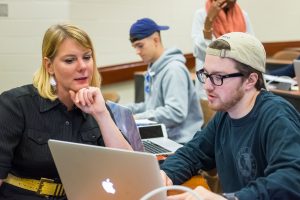 Pam Cash, former assistant dean at the Bryan School, who joined as an academic advisor in 1985, says certain organizational changes have been pivotal for the school.

“When the Department of Marketing, Entrepreneurship, Hospitality, and Tourism was created and the Department of Consumer, Apparel, and Retail Studies (CARS) came into the Bryan School, they brought energy and excitement and expanded our perspective, vision, opportunities for students, and faculty collaboration,” explains Cash.

Embracing student-focused services also changed the school’s dynamic. Cash served as director of the school’s Student Services Offices, established in 1997. Hiring people who specialized in advising allowed faculty to do what they do best, and advising morphed into a resource for students in all aspects of professional development, with an emphasis on
internships and experiential projects, study abroad experiences, and career services.

“College is about growth and development,” says Cash. “Our school is – and always has been – up to the challenge of encouraging a creative, critical thinking, innovative mindset in all of our graduates to prepare them for careers that may not yet exist.”

Learn more about the Bryan School’s history at Bryan50.UNCG.edu.