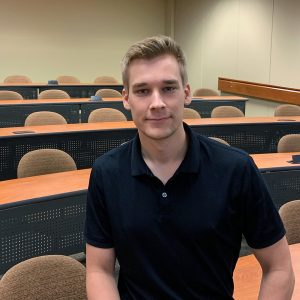 Lasse Palomaki interviewed for the position of Undergraduate Professional Development Specialist in the Bryan School through video chat, during a break from his military training in the city of Parola. A Finnish native, Palomaki was completing his year of mandatory military service following his education. He earned both his bachelor’s degree and his MBA from the Bryan School, and he was ready to return to the area that had become home.

“It was easy to come back here because I knew it would be such a wonderful environment,” Lasse explained when asked what drew him back to the Bryan School as a professional. “I felt that I got so much out of (my experience) that I wanted to give something back.”

Lasse first came to UNCG in 2012 for a very specific reason – soccer. In fact, he originally came to the United States in high school in order to pursue the sport. He quickly felt at home in the Bryan School. “It’s kind of a cliché, you know, people make a home and they make a workplace, too.” To illustrate his point, Lasse added, “I think we’re still kind of a hidden gem in a way that not a lot of people recognize the value that we have here, but we have wonderful professors, wonderful researchers, wonderful staff. Students gain a lot of exposure through the Bryan School, and there are a lot of connections to be made. I received plenty of opportunities that I may not have gotten had I not gone to the Bryan School.”

As an undergraduate, Lasse earned his bachelor’s degree in international business and business studies with a concentration in human resource management. He completed his MBA in 2018. He’ll be able to put all the skills he developed to great use, as his new position puts him in charge of 20 students working in the Blueprint Series, the Bryan School’s new required four-year professional development program.

Lasse described the program and his role with great excitement: “For each instructor in BUS 115 and BUS 216, there’s a team leader to go with them, kind of like a teacher’s assistant. Those team leaders are either sophomores, juniors, or seniors, and they help (teachers and students) any way that they can. I like to say that I’m their number one fan instead of their boss because I try to do my best to support and encourage them.” Lasse also oversees daily operations for the Bryan School’s Bryan Gold program, which is a gamified approach to professional and personal development.

Another part of Lasse’s job sees him teaching two sections of BUS 115, which gives him the opportunity to showcase the importance of professional development to undergraduate students. “It’s never too early to start,” he noted, acknowledging that many undergraduate students are reluctant to take part in networking and social events, “I know I felt that way, and I know a lot of other people did as well, and I feel like I wasted a lot of opportunities in my first year. Students should never be afraid to go to events as a freshman or sophomore, be confident in themselves, and say ‘I’m here to learn and better myself.’”

Lasse’s thoughts on the importance of professional development go hand in hand with two major lessons he learned through recent experience. His time in the military taught him to “become comfortable with being uncomfortable”, and that “the unknown is an opportunity to learn, and not an obstacle that can’t be conquered.” He applies these lessons to his new role each day.

“There are times when you’re going to be uncomfortable. You’ve got to learn to embrace that because you get certain things out of it that you wouldn’t think you would. The unknown is very fearful to us. If we don’t know what to expect, we get very hesitant and very nervous. You have to be confident and believe in yourself. Coming into a new role, not knowing exactly what to expect, I have to be comfortable with the unknown, and in the military, I learned to do that.”

Learn more about these programs for Bryan School Undergraduate Students: