The Textile and Apparel Programs Accreditation Commission has granted accreditation to one of UNC Greensboro’s oldest and most esteemed programs – the B.S. in Consumer, Apparel, and Retail Studies at the Bryan School of Business and Economics – through May 2029.

“This is an amazing accomplishment – this is a very big deal,” said Bryan School Dean McRae C. Banks. “The TAPAC standards are quite high and very few schools are able to find success in their TAPAC accreditation efforts. I could not be more proud of Dr. Nancy Nelson Hodges, her CARS colleagues, as well as her amazing students.” 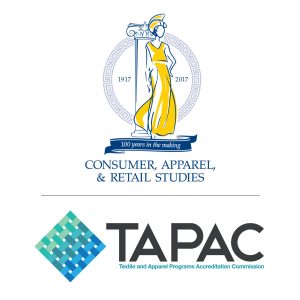 The department was given its current name, Consumer, Apparel, and Retail Studies, in 2005, and celebrated its centennial in 2017.

“We are extremely proud,” said Dr. Hodges, department head and Burlington Industries Excellence Professor. “This accreditation represents a communal effort within the department, with industry representatives, faculty, advancement, alumni, and students all contributing.”

About 300 undergraduate and graduate students are currently enrolled in CARS programs, according to Hodges. The majority of the department’s graduates go on to work in the apparel industry with careers in design, production, marketing, distribution, and new technologies.

Hodges and her colleagues are active when it comes to providing students with professional development and real-world industry experiences. Alongside course projects that involve working directly with apparel and retail companies, CARS integrates as many opportunities to understand the real world as possible through guest speakers, field trips to local businesses, as well as a study tour to New York City.

“What sets the CARS program apart from other apparel programs is that the internship is required for the degree,” said Hodges. “Other programs offer internships as elective hours. We view it as an integral part of our degree program and a necessary aspect of our students’ preparation for becoming apparel and retail industry professionals.”

In 2021, 95 Bryan School CARS students took part in summer internships, and roughly 75 percent of those were paid positions.

For those who haven’t worked in the department for 25 years as Hodges has — that’s a lot.

“It’s the highest number since I have been with CARS — and ever, to my knowledge,” she said of the program’s bright future. “That 95 number reflects our program’s strength, as well as the fact that the apparel and retail industries have rebounded very well from the pandemic.”